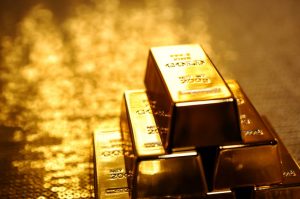 Something interesting happened in the gold, or bullion, market when someone traded over 18,000 lots and sent the price down by 1.6% in about a minute. This sort of volatility is unusual but had no long-lasting ramifications. When I read comments on the story I was struck by the fact almost immediately the most suggested theories were conspiracy based.

When reading about what happened, it becomes clear gold traders are completely unalarmed and know precisely the reality of the situation. Someone tried to trade 18,149 ounces of gold but accidently chose to sell the same number of lots. A trade of this nature in ounces is quite typical. Gold is currently a pretty flat commodity without much movement or trading and thus the larger trade, a lot is about equivalent to a hundred ounces, was unusual.

I find this incredibly interesting. The logical and rational explanations, well clarified in the article, fall on completely deaf ears. There are quite a few people who are invested in various financial collapse schemes. These people want your money. They want you to be convinced an imminent downfall is coming and the price of gold will spike. They want people to be scared, because frightened people are fleeced of their money all the more easily.

These sorts of doomsayers have been around for as long as we have written records. They’ve always had the same motives. I think it’s highly unlikely the people commenting on these stories are those who will reap the financial windfall cascaded on them by willing fools. The conspiracy commenters are merely unwitting agents and future victims.

There is no great financial collapse coming. Buying gold is not going to make you rich. No one is manipulating the market. The only easy way for you to make millions of dollars in the commodity market is to understand human frailty. People are easily frightened and, when so, lurch as a pack toward a single objective. I’m reminded of watching a soccer game where the competitors are all about five or six years of age. They chase the ball as a herd. If a couple of players are smarter and more skilled than the rest they can easily use this tendency to score goal after goal.

That being said, it’s your money. Do with it as you will. If you want to purchase gold, or anything else, because you believe disaster is right around the corner, far be it from me to stop you. I don’t begrudge those who understand how things work their profits. To the smart go the spoils.