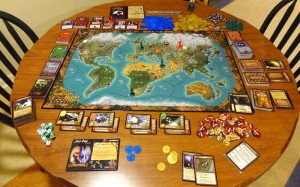 Last night was game night and we played Fortune and Glory from Flying Frog. The main reason I mention this is not that my glorious victory erased the memory of my ignominious defeat at Illuminati but that we had a fascinating moment in what is often called Game Theory.

I know many people aren’t much interested in board or role-playing games but I think what I’m going to talk about today is something you should be interested in regardless of your gaming habits. Game Theory largely involves decision making while playing games but has tremendous application when it comes to real life as well.

Understanding not only statistical odds but also the many other factors that go into a successful endeavor is a study that everyone should understand. I was never taught game theory while growing up and I’m certain that I am the worse for it. I’m of the opinion that Game Theory should be mandatory education at a primary level of schooling and continuing through secondary and advanced education. That being said I’m not going to go too deeply into the topic. I just want to explain what happened last night and how it was I emerged victorious. I think it is instructive in a number of ways.

In the game Fortune and Glory you move your tokens around a board that is made up the world. The goal is to collect Fortune. You do this through a number of game mechanics. In addition to collection your own Fortune you also gain various Event Cards which can be used to help you or hinder your opponents. This is very important.

Back to the game. Two of my opponents were playing quite well and getting close to victory. I then began to use Game Theory. In Fortune and Glory you get the most Fortune through the accumulation and eventual sale of Relics. To get Relics you have Adventures. You must pass a series of Adventures to get the Relic. You can rest between Adventures and hold your victories or push your luck, but if you fail an Adventure you lose your accumulated successes.

In this case I used good Game Theory in pushing my luck even though my chances of success were low. I then had a series of fortuitous dice checks for which only luck gets the credit, not me.

But now comes what for me was the most interesting point of the game. There were three of us with enough Fortune to win the game but we had to rush back to our home base to claim the victory. We were all within a lucky Movement roll of victory and it came time for initiative to see who would move first in the upcoming round. It seemed clear that whomever moved first of the three of us would be victorious. The dice were rolled and my string of luck ran out, I would act last in the round.

Here is where my Game Theory failed me. I assumed all was lost. However the reality is that this “bad luck” roll actually allowed me to win the game. As the two fellows with the appropriate amount of Fortune made their final moves all of sudden my fellow competitors started to pull out various Event cards that blocked their progress in one way or another. After a flurry of activity it was suddenly my move and no one had any blocking cards left!

The path was clear and victory was mine.

While I’m happy to have won, the reality is that playing the game with a great bunch of guys made us all winners (just me a little more). The real moral of the story is to study Game Theory because it will help you make good decisions, not only across the board but in life as well. Sometimes it’s not easy to see what the best decision will be and often it is counter-intuitive.

One thought on “Game Theory – Fortune and Glory Board Game”